The .pdf version with images from K-9 Cop Magazine 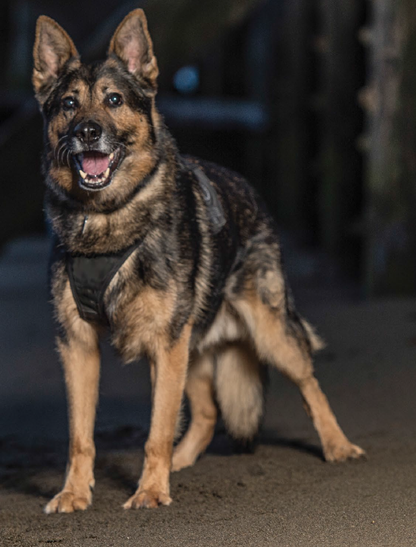 For the purposes of illustration, let’s use a simple example from obedience training. Suppose I teach my dog a “heel” command and on command from anywhere around me or any reasonable distance away from me when I say, “heel,” he runs quickly to me and gets on my left side in heel position. I teach him another command, “come.” When he hears this command, he must run towards me and assume the front position, sitting in front of me on my center line, looking up at me. The only material difference in these commands is the end position. In one case he comes to heel position and the other he comes to front position. If I set the dog up in a down a distance away from me and say one of the commands, the context looks the same to the dog, so in order for him to discriminate the proper action, he must not just act based on the context of the exercise, but listen to the particular word I am saying, as the two words (commands) represent two different options for the dog and we want him to pick the correct one. If he is distracted by his environment and doesn’t listen to what we say, he just hears us utter a sound and goes off the context, so he has a 50-50 chance of being correct. However, we want him to pay attention to the exact word we are saying. By setting up exercises where we test the dog’s ability to discriminate, we ensure the dog is being attentive to detail.

Now suppose we teach the dog both behaviors. First, we will need to have two separate commands. When we say “out” the dog goes into the out and guard. When we say the dog’s name and heel command, “Rex – heel,” the dog releases and returns to heel position.

In a previous article series last year in this publication, I explained the training progressions for both of these commands.

“Now the question becomes, when the decoy freezes up, and we say one or the other of these disengage commands, is the dog listening to the command given or just listening to us speak?”

Now the question becomes, when the decoy freezes up, and we say one or the other of these disengage commands, is the dog listening to the command given or just listening to us speak? Because dogs are contextual learners, they will tend to try and read the context rather than listen to the command, therefore, may pick the wrong response. This reliance on context occurs all too often because trainers pattern their training to look the same all the time. It creates a lazy dog that doesn’t think or pay attention to the command words. The dog operates on large contextual cues rather than listening to the exact words we are saying. This lends the dog to making mistakes when he misreads the context.

Teaching the dog to discriminate between verbal cues is important if we want the dog to be able to make these fine distinctions. As with everything in training, it comes down to how we give the dog feedback as we set up these discrimination opportunities in training. In the exercise with the out and guard vs. the out and return, the context of having two decoys on the field (which implicitly cues the redirect in that there is a second opportunity) will tend to have the dog read the context for a redirect. If we hide the second decoy and have him bite one visible decoy prior to asking for a release, he will likely read the situation for an out and guard. Knowing this helps us set up the dog to create the discrimination.

Let’s say we set the decoys up on the field to both be visible options for the dog. We know this set up will bias the dog contextually toward redirecting, all else equal, because the reward decoy is out in the open. Thus, it should give us the opportunity to enforce a guard when we command the out and guard. We want to set up the dog for success by having the proper equipment on the dog so we can make sure not to allow an incorrect choice. For this exercise, we put the dog on a flat collar with a long line and a training collar with a short (2.5’) tab leash. The long line allows the handler to communicate with the dog through line tension to keep the dog from anticipating the release with a tight line. The decoy can hold the tab line on the training collar to both be able to enforce the release of the grip and to keep the dog in the guard if that is the command given. If the dog is told to out and return instead, the handler uses his line to ensure the dog doesn’t fall into the guard and comes back to him.

We begin the session by placing the dog on the field with the decoys 180 degrees apart. If you can, directionally send the dog to the decoy of your choice and work the dog’s gripping fundamentals, pushing into the grip, countering, pressure the dog a little, and then
redirect the dog using his name. The decoy must be ready to enforce the out with the tab if necessary, and the handler must be ready to pop the line towards him and make the dog come all the way to heel position. Pivot around, face the other decoy, and send the dog for his reward bite for coming out and back to heel position. I would allow the dog to do two or three of these out and returns with redirect bites and establish some contextual momentum. Then ask for the out and guard. If the dog is just listening to you speak and not listening to what you said, a context driven response would lead to another out and return, but the decoy holds the tab line and enforces the guard position, not letting the dog turn around and head back to the handler. The dog is then rewarded in place by the decoy with a grip to reinforce the out and guard. Each time we run through a session of this, we are always in a position to enforce the proper reaction to each command, whether it is out and guard or out and return.

Next, we bias the context to out and guard by hiding one of the decoys. The dog is sent to bite in the same set up with a tab line and long line as described above. The dog is commanded to out and return and that command is enforced. Once the dog arrives in heel position, the second decoy comes out of hiding and can simply walk up to the dog in heel position and deliver a grip in place. The decoy “comes out of nowhere.” The first decoy can then hide as this is going on and the dog is once again asked to out and return; as the dog is on his way back properly, we mark the behavior (“yes”) and release the dog to go bite the hiding decoy who comes out of hiding as the dog is on his way back to the handler. This will add speed to the return and add some anticipation of a quick grip on the out and returns. Mix in an out and guard now after these few redirects to ensure the momentum of the out and returns doesn’t cloud the dog from listening to the command for out and guard. You should see fewer mistakes and less need for the handler and decoy to intervene with corrections. This means the dog is actually listening to the commands and not going off of the context any longer.

Now we add another layer to the learning process by understanding how the concept of generalization plays into this learning experience. While discrimination is about teaching the dog the “differentness” of two responses to two different cues, as in our out and guard v. out and return training, generalization teaches the dog about the “sameness’ of responses to commands given in those different contexts.

As this process of discriminative learning takes place, the dog also learns to generalize the out and guard response when that command is given in a multitude of contexts (outside on a field, in a building, one v. multiple visible decoys, in the woods, using sleeves v. suits v. hidden sleeves, and when he is physically fresh v. fatigued for example) so that the dog both discriminates (recognizes that a different response goes with the different command) and generalizes (that command is the same in multiple and varied contexts). It is crucial to understand that this type of “generalized discrimination” takes a lot of learning trials to accomplish and proof. The dog must get the experience to make the choices and be rewarded for the correct ones, and corrected for the improper ones.

As in a lot of training, handlers make the mistake of thinking the dog “knows” something well before he has completed enough trials to really say he has generalized his learning. Think about all the varied contexts you can imagine in which you can do these exercises and you start to get an appreciation for the amount of practice it requires to get a reliable, generalized, response.