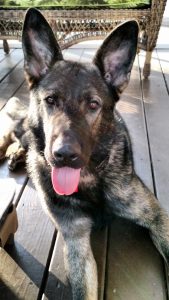 I would like to let you know how my world is going since Linc was delivered to me on Oct 31, 2016. He is the most unbelievable dog ever that has been in my life of 66 dog-owner years! I had a robbery at my home and then an attempted break-in by 4 men shortly after the suspect was jailed on charges of grand larceny. That was the most terrifying time I have ever experienced. Within days I scheduled an appointment with Tarheel Canine and met with Samantha who discussed the dogs, their training and the responsibilities of ownership. I was overwhelmed when she allowed me into the training area to watch some of the dogs at work. It was my first time to meet Aaron and now I am his biggest fan although he almost scared me out of my mind with the attack and bite work. The following week I met with Jerry Bradshaw, the training director who advised me on which type of dog that he felt would be best for me and my lifestyle. I met a couple of dogs and then Jerry mentioned another dog AKA Hugo. When I first saw Hugo he looked a little scrawny but had a beautiful face and a prance to his step when he walked. His attention was continuously on his handler. I knew this dog would be my special personal protection without question or doubt. I made the purchase that day. Cierra  was the one I called or heard from weekly and she allowed me visitations every few weeks. I was allowed to walk him and spend time watching him train with Cierra as well as Aaron. He was more handsome each time that I saw him, gaining weight and learning quickly. Stephanie then took over with house and personal training. I probably drove everyone crazy with driving down to visit and taking pictures. It took 4 months before he was delivered to my home. Stephanie sent me information on preparing for my dog and spent endless phone calls and texts responding to my questions and concerns. I was so excited when Stephanie and Aaron delivered Linc to our house. Their confidence and encouragement was so incredible. They made the transition as easy as it could possibly be. Linc has been wonderful in his behaviors and performance due to the specialized training through Tarheel Canine. He is now a lustrous 80 lb young gentleman. He’s happy and active spending most of the day outside with me gardening and playing. I continue to learn something new from him or about him everyday. I feel absolutely safe with him and because of him. My gratitude of thanks to Jerry for selecting this dog for me and to all those at Tarheel Canine especially Cierra, Aaron and Stefanie for the many hours of their expertise and love that they put into all of the dogs that they train and manage. Because of Linc my world is so much better! Thank you again, Connie Getz, Lewisville, NC.